The generated electrons are now accelerated to another closely located Phosphor layer. This layer act as the Anode layer. When the accelerated electrons hit on the phosphor anode layer, light emission takes place through luminescence. Each electron from the photocathode can generate many electrons from the phosphor layer. This will create the visible image in the camera. Modern infrared vision systems have charged channels to accelerate the speed of electrons. The electrons release millions of electrons from the charged channels so that image from far located objects can be easily obtained. 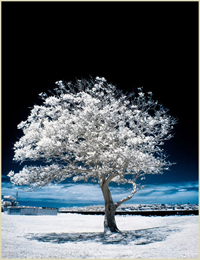