Laser is a narrow beam of Photons emitted by specially made laser diodes. Laser diode is similar to an ordinary LED, but it generates a beam of high intensity light. A laser is a device in which a number of atoms vibrate to produce a beam of radiation in which all the waves have single wavelength and are in Phase with each other.

Laser light is Monochromatic and can be focused as a pencil beam. The beam of a typical laser has 4×0.6mm widening at a distance of 15 meters. Like an LED, laser diode converts electrical energy into light energy.

The most common laser diode generates semiconductor or injection laser. In these lasers, a population of Inversion Electrons is produced by applying a voltage across its p-n junction. Laser beam is then available from the semiconductor region. The p-n junction of laser diode has polished ends so that, the emitted photons reflect back and forth and creates more electron-hole pairs. The photons thus generated will be in phase with the previous photons. This will give a Pencil Beam and all the photons in the beam are Coherent and in phase.

Laser diodes can be switched on and off at frequencies as high as 1GHz, making them ideal in Telecommunication applications. Since laser generates heat on hitting the body tissue, it is an ideal solution to heal sensitive parts like Retina of Eye and brain. Laser can be used to pinpoint the lesions so that nearby tissues are not affected as in the case of surgery. 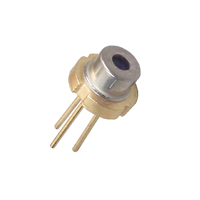 A Word of Caution

Laser is a high intensity penetrating beam and is extremely dangerous when focused on to the Eye. Low cost Laser pointers are now available in the market and some people handle them carelessly and may even give to children to play with. A Laser pointer with output power higher than 5 mW is harmful. Take utmost care while handling laser diodes. Always take precautionary measures while trouble shooting CD players, Laser printers etc.