The full moon that appears in the sky on 19th March 2011 will be really bigger than the normal moon that appears every month. Since the Moon is bigger in appearance, it is called as Super Moon. The Moon is around 2, 35,000 to 2,48,000 miles away from the earth and on 19th March 2011 it is around 2,21,567 miles away from earth, around. This makes the Moon, a Super Moon .The Moon comes to the closest point to the earth every 18 years and when it happens in the full moon day, it appears around 14 percent bigger and 30 percent brighter. 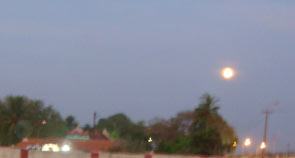 The last super moon appeared in March 1993 and the next Super Moon is expecting in 2029. When the moon is in the farthest point in the orbit, it is Apogee moon and when it is close to earth it is Perigee moon which is called as the super Moon. On 19th March 2011, moon comes about 31000 miles closer to earth. The super moon appears as too large just after sunset because of our Moon Illusion. It is closer to the ground and shines through trees giving an illusion that it is too bigger.