Liquid Crystal Display is a kind of screen filled with a polarizing fluid between two glass plates. This liquid is an electrically controlled fluid trapped between two transparent polarizing sheets. The polarizing axes of the two sheets are aligned perpendicular to each other. The polarizing liquid is filled in cells which have electrical contacts to permit the entry of electrical field into the cells. When an electric field is applied, the molecules in the liquid align themselves with the field, inhibiting rotation of the polarized light. As the light hits the polarizing sheet perpendicular to the direction of polarization, all the light is absorbed and the cell appears dark.

The whole display has array of segments called Pixels which may be coloured or monochrome or both. The pixels may be divided into Sub pixels of Red, Green, and Blue by additional filters as in the case of LCD TV. These pixels are arranged in front of a light source with a reflector. Each sub pixel can be controlled independently to produce thousands or millions possible colors for each pixel. The liquid crystal makes the light to pass through the other by twisting the polarization of light entering one filter. By applying a small electric charge to transparent electrodes over each pixels or sub pixels, the molecules of the liquid crystal are twisted by electrostatic forces. This reorientation of the liquid crystal makes the image.

LCD screen is too sensitive to mechanical shocks and heat , since the pressure may squeeze the fluid present in between the plates which can cause its permanent damage. Excessive heat can change the physical properties of the liquid so some part of the screen may damage and appear as black spots or segments.

Before an electric field is applied, the long, thin molecules in the liquid are in a relaxed state. Ridges in the top and bottom sheet encourage polarization of the molecules parallel to the light polarization direction of the sheets. Between the sheets, the polarization of the molecules twists naturally between the two perpendicular extremes. Light is polarized by one sheet, rotated through the smooth twisting of the crystal molecules, then passes through the second sheet. The whole assembly looks nearly transparent. A slight darkening will be evident because of light losses in the original polarizing sheet. 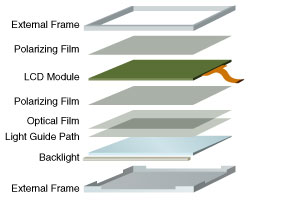 The concept of liquid crystal display was first found out by Otto Lehmann in 1904. In1911, Charles Mauguin described structure and properties of Liquid Crystal. The first operational LCD was introduced in 1968 by George Heilhemer.

Two common types of LCD are

This is commonly used in pocket calculators and digital watches. It is viewed by ambient light reflected in a mirror behind the display. They have lower contrast than the transmissive type, because the ambient light passes twice through the display before reaching the viewer. The advantage is that there is no lamp to consume power, so the battery life is long.

Television LCD is the most advance technology that uses active matrix LCD. Here a matrix of Thin-film transistors (TFT) is added to the polarizing and color filters. It is used to rapidly switch the LCD’s pixels on and off. Each pixel of the LCD has its own dedicated transistor. This transistor allows each column line to access one pixel. When a row line is activated, all the column lines are connected to a row of pixels and the correct voltage is driven onto all of the column lines. The row line then is deactivated and the next row line is activated. All of the row lines are thus activated in sequence.