String LEDs are now very popular as decorative lights which are available in different colors at very  low cost. It gives very brilliant colour display sequencing in four channels. The blinking pattern is controlled by a programmed chip and the switching is achieved by a high volt SCR .String LEDs show automatic Multi pattern changing display. Its working is really amazing and breaking all the conventional circuit designs. It shows that how a chasing and blinking light pattern can be created using a very simple method. Thanks to China technology  for giving such a simple and low cost decoration. Let’s open the tiny circuit box and see what is inside.

String LED is low cost versions and each set has four strings each having 25 or 30 LEDs. These LEDs are directly powered from AC and its power consumption is very low compared to the 6 volt bulbs genrally used in sequential displays. 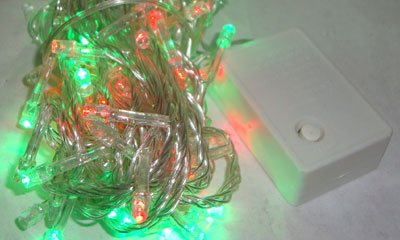 The circuit board of string LED is directly powered by the 230 volt AC and the chip gets DC through  diode rectification and capacitor smoothing. Each string of LED is driven by a high volt SCR and its gate trigger is obtained from the Programmed chip. The most commonly used SCR is PCR 406 which is a high performance planar diffused PNPN device intended for low cost high volume applications. Its peak offset voltage is 400 volts and on state current 0.5 A.

The LEDs in each string are serially connected and each has 2M current limiting resistor.

Four strings are independently operating with common Phase line. From the circuit case, 5 wires are coming out. Of these, 4 wires are used to connect LEDS and the 5th wire is common Neutral. That is, the strings of  LEDs are connected to the Cathode of SCR and the Anode of SCR gets Phase. All the strings are then connected to the common neutral. Thus when the SCR triggers by getting pulse from the Chip, current passes through its Anode to Cathode and then through the LEDs and the circuit completes. Since the LEDs are working in AC, noticeable flickering is seen but brightness of LEDs overrides these flickering. Each string has 25 LEDs making the whole set 100 LEDs. 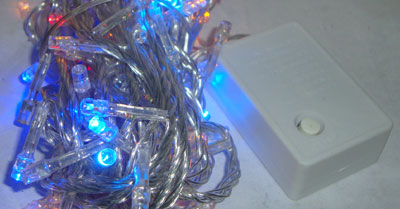 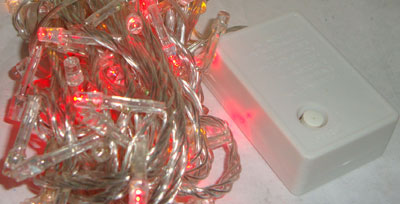 The wires and sleevings are water resistant and can be used in outdoor applications.